The Worcestershire Woodland Project (WWP) offers participants an opportunity to experience working in an outdoor woodland setting, learning new skills, building social skills and raising levels of confidence. The project aims to equip participants with vocational skills to use in the workplace whilst also involving people in conservation work and improving levels of physical and mental health and wellbeing through the use of social forestry. Activities range from coppicing, weaving fences, pole lathe wood turning, cooking on camp fires to walking through the woodland learning the history and dynamics of the woodland environment. Our base camp is in Churchill Wood, Spetchley. Materials are sourced from the wood itself.

Please choose a page to visit

The bluebells are shooting and the birds are starting to get more vocal but best of all is the tree sap is closest to the bark in spring meaning we can do some extraction again. 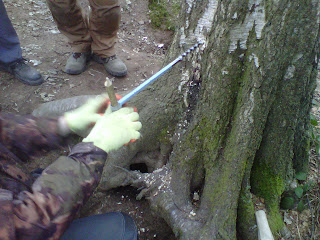 We 'drilled' into the silver birch above where we did it last spring. As soon as the sap begins to flow we insert the channel, which we made out of some hazel and attached a bottle to collect the sap in. 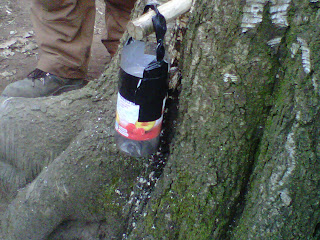 We left nature to take its course and went off for our days work, clearing our coppicing areas and burning brash.
When we returned just before packing up the good old silver birch had filled our bottle right up and gave everyone a refreshing drink. A real taste of spring. 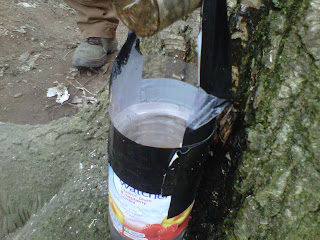 Another visit to Croome

It was a bright and fresh day for our return visit to Croome brightened further by the warm welcome we received from all the dedicated team who keep Croome looking as spectacular as it does.

Hugh and his workforce whisked us off to a far corner of the estate where we helped to manage the hedge which surrounds ornamental trees, one of several large circular enclosures which cover the landscape at Croome.

As always there was laughter, chatter and good humoured teasing as we all got stuck in and some of us got a bit more competitive that others about how quick or strong they were!

We got a fair bit done before having a walk back up to the visitors centre where we were treated to a wonderful home made soup and sandwiches from the 1940's style canteen, housed in the old airman's infirmary. A few of us had a wander around having a look at the fascinating history of the RAF base including a scaled model of what the whole site would have been like.

All in all another great day was had with our friends at Croome. It was nice to see our two groups working so well in harmony, all mixing together and learning from each other.

Thanks again to Katherine Hugh and all the team. The WWP gang hope to see you again soon.

to see what you are missing at Croome please click the link here Croome Park National Trust
Posted by WWP at 17:00 No comments:

It was another great day Friday in the excellent company of Sarah, Birch and Rob from Step Out Outdoor Learning http://www.step-out.eu/

After warming ourselves up with some hunting for dry twigs to start our fire (not so easy with the weather we've had) we sampled Birch's tea making skills before moving on to some real Bush craft activities.

Rob and Birch led a group of enthusiastic WWP participants in a shelter building activity, whilst Sarah taught other participants how to make some flat bread to cook over the fire and knife skills to strip bark, making sticks clean and safe to use as cooking utensils.

The raucous laughter coming from the shelter building gang led the others to see what they were up to! They certainly seemed to have had fun and had built a great shelter. Freddie took the testing phase very seriously and it looked like he had bedded down for the night! Whilst Christopher and Jason decided to see if they could fit both of them in there! I don't think I've ever seen the whole gang laughing so much.

We had such a great, fun day and as usual learnt so much that we can use again. We look forward to seeing the Step Out team very soon.

Hope you enjoy the photos 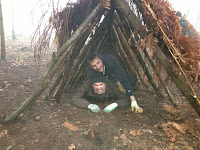 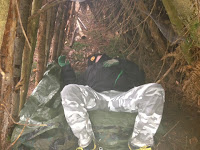 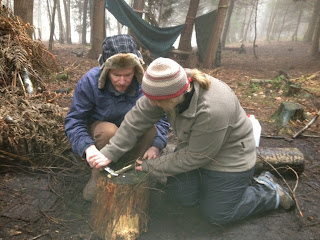 Father forgive me; it has far too long since my last blogpost! However, after today's fantastic visit to Croome, National Trust; Landscape, Park and House, I felt I had to put finger to keyboard and let everyone know!

This visit was our exchange visit from when the very talented Katherine and Hugh (who manage the massive grounds at Croome Park) came for a bus-mans holiday and did a days volunteering with us last month down at Coopers Mill, Wyre Forest.

Croome was owned in the 18th century by the 6th Earl of Coventry, who commissioned the then relatively unknown Lancelot Brown, (later know as Capability Brown) to develop the magnificent park and landscape surrounding the 'big house'. Brown, along with Robert Adam were also engaged to develop the property itself.

Hugh and Katherine took us around the grounds surrounding Croome Court. The landscape is vast and varied and has something to please everyone including the fantastic walks along the 'faux' river (said to be a scale version of the River Severn). This 'river' was completely man made and of Brown's design and took some ten years to dig out and create! Fancy that as a job! But those ten years were certainly well spent as the resulting twists and turns of the 'river' with its lakes and bridges and numerous surprises around every turn, will have you interested from start to finish as they did us.

Katherine and Hugh showed us the many tree and plant varieties that were still in existence from back in the day as well as the species planted since it's restoration by the dedicated team of Croome staff and volunteers, to bring the parkland back to how it would have been originally. It was interesting to see Ginkgo trees as well as varieties of oaks and also privet, which when allowed to grow naturally produces delicate white flowers with a beautiful fragrance. We followed the river round and came to the house itself which is steeped with layers of history, not just from the Earl's days in the 18th century but also it's varied and colourful uses over the subsequent decades. I won't say any more because you really HAVE TO go and see it for yourself to fully appreciate what the house offers. I cannot recommend it highly enough and hope that we have many more visits to Croome still to come. Next time though, we'll be rolling up our sleeves and helping out with the list of never-ending jobs and projects that Hugh and Katherine and the volunteers undertake to ensure Croome is enjoyed by everyone both now and in the future. Here is a link to get details of where they are:

A massive thank you to Katherine and Hugh from us all at the WWP for a wonderful day at Croome. 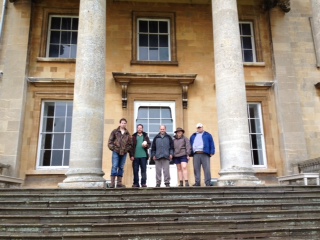 The Coopers Mill fencing job is still going strong, with the whole gang digging holes, preparing posts, rails and pails. Thanks especially to the dedication and hard work of two WWP members particulalry; Gary and Graham, who have devoted their services for extra days of work voluntarily to ensure that the fence work really takes shape. I hope you'll agree that it looks fantastic. I'm looking forward to doing some more work on it this Friday. 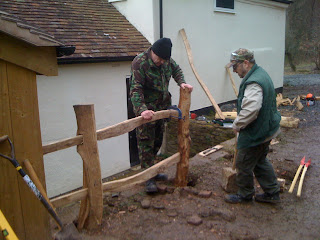 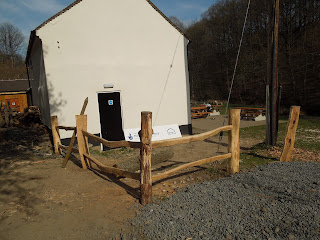 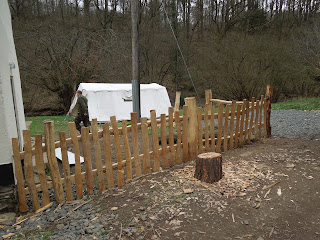 Last time we were at Coopers Mill a lovely big heron swooped in and landed in the shallows of Dowles Brook. Unfortunately we weren't quick enough to get a photo but i'm hoping that he may come and join us again this week and if the local kingfisher turns up too that would be great.
Posted by WWP at 13:20 No comments:

Good evening blogland. I'd like to tell you all about a wonderful Friday the guys at WWP had last week. We had a days instruction on the ancient art of hedge laying. Our tutor for the day was none other than the infamous Wade Muggleton, all round woodland skills expert. We accessed the training through the Wyre Community Land Trust, who Working in partnership with the forestry commission and Natural England, would like to replace as many fences as possible with laid hedge fencing.

Wade first taught us why this art exists. Hedge laying is the ancient skill of converting a natural growing hedge in to a functional fence that will keep live stock in its field. It's said that the fence must be strong enough to contain a bullock!

There are many variations on the laid hedge, depending on the geographical area you are working in, but as we are in the Midlands, the style of hedge we learnt to lay was the 'Midland Style'. 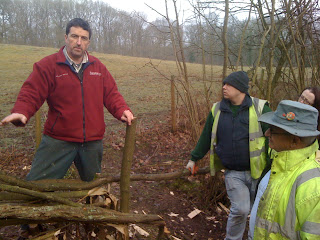 Wade talking the group through the methods and purpose of the laid hedge.

Then it was up to us to get stuck in an have a go. 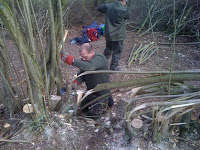 Dan and Gary using Bill hooks to pleach hazel rodes. Pleaching is the process of part cutting through trees and saplings growing in the hedge which allows them to be pushed over and will remain growing at a 30 degree angle along the hedge row. 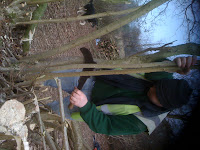 Ian receiving instruction from Wade on how to weave in the heathering. These are 2 hazel rods bound together over the stakes which tie the whole hedge together creating a firm top to the fence. 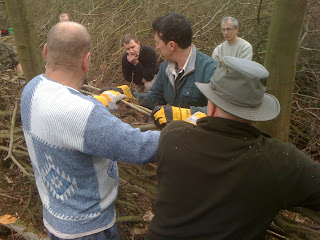 It was all hands on deck and full production mode today with all of the WWP gang getting stuck into continuing our fencing project for Natural England . We were joined today by Mark the new Occupational Therapist from Shrub Hill Workshop. He wanted to come and experience what it was like to be a part of the WWP so that he can know what he is recommending to his clients. I knew by the end of the day he'd be busy planning how he'd be able to get out and work with us again! Such is the addictive effect of the WWP. Anyway, Mark agreed that the satisfaction of the work involved along with the beautiful setting and of course, wonderful company, makes for an extremely therapeutic environment. 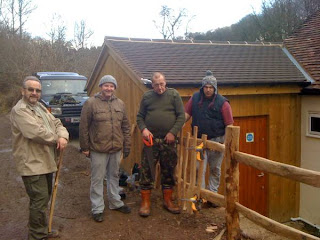 So order of the day was some hole digging, which the able and willing Dan and Ian set to work on. Graham and Gary got back to work on the fence they started on Wednesday. Mark found a home on the shave horse and Mike and me.....well we put the kettle on and milled about a bit. 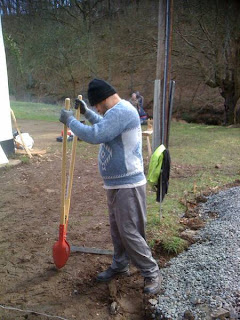 Tales from the Woodland